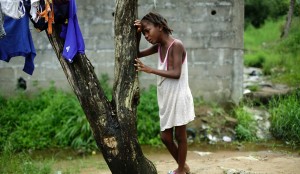 Media (& not just in the US) has hijacked the story of the Ebola epidemic in West Africa which the Center for Disease Control (CDC) estimates could affect 1.5 million by early next year. The story has now become about the threat of Ebola to the US & European countries & alarmist speculations about purposely infected ISIS operatives on suicide missions & terrorists using bags of Ebola vomit for bioterrorism. This tops in burlesque all the anti-communist scares of the McCarthy era combined & would be comical were it not for the 1.5 million people in West Africa threatened with devastating disease.

Partly the intention is switch & bait so we don’t notice nothing is being done to medically address the disaster. But it can only be pulled off convincingly with the grotesque mind-set of white supremacy & includes suggestions that Liberians are foiling attempts to provide treatment due to ignorance.

During the Ethiopian famine of 1974, deranged Harvard academics applied the medical model of triage & claimed it more merciful to leave famine victims die. We don’t know if the genocide model of triage is being applied to West Africa; we only know nothing is being done to address the catastrophe. Coming out of the “zero population” crowd, there have always been warped people who promoted this crap–of course only for countries with brown & black populations. It would be unthinkable to suggest this for nations considered primarily white because the outrage would be thunderous.

You don’t need to devise conspiracy where there is no evidence. You don’t need to see divine retribution or any other crazy-assed misanthropic explanation when neoliberal healthcare (i.e., the almost complete absence of healthcare) alone indicts. Liberia, the epicenter of the epidemic in West Africa, not only does not have Ebola treatment centers; it doesn’t have primary health care facilities because the president & Nobel Peace Prize winner, Ellen Johnson Sirleaf, is investing millions in a military arsenal.

When Obama deployed 4,000 troops of the 101st airborne division to Liberia it was under the guise of humanitarian aid. It was claimed they were going to supervise the construction of 17 treatment centers of 100 beds each & to train medics. But the 101st airborne division is a combat unit that may include medics but is distinct from the medical corps. If the CDC projects 1.5 million Ebola victims in the next four months what the hell will 1,700 beds do to address the disaster? Why do they need a division of elite combat-trained soldiers to stand around watching construction? Why aren’t they deploying hundreds of doctors & nurses instead of a few medics? There’s little evidence the 101st airborne division is or ever has been deployed for humanitarian purposes. The only people who believe the Pentagon sends soldiers for humanitarian purposes are those who’ve watched too many WWII movies.

There are confusing reports about the development of an Ebola vaccine to prevent the spread of the disease. Many reports conflate a vaccine for prevention with a serum to treat those already afflicted. The few who contracted Ebola & were treated in US hospitals were given experimental serums not yet cleared by the Food & Drug Administration (FDA) for mass production.

There are apparently universities under contract with the CDC engaged in research for a vaccine & for a serum. There are, more significantly, three Canadian companies contracted to develop a vaccine by the Defense Threat Reduction Agency (DTRA), a division of the US Department of Defense. The function of the DTRA is to counter weapons of mass destruction (including biological weapons) & provide combat support. Tekmira Pharmaceuticals, a Vancouver company, was contracted for $140 million by the DTRA to develop an Ebola vaccine. In March 2014, Tekmira was granted a Fast Track designation from the FDA but in July, as the epidemic developed in West Africa, the FDA placed a full hold on clinical trials. That full hold was modified to a partial hold in August. Information is too sketchy to make accusations but it certainly appears fishy, maybe even criminal, for the FDA to fart around on the development of a vaccine when over a million human lives are at stake.

What the hell kind of world is this where millions of human beings are denied basic medical care? Where epidemics are militarized? Where millions of lives are jeopardized? Where people with the good sense to distrust corrupt governments are portrayed as ignorant & causing their own demise? This is the world of neoliberalism, the barbaric phase of capitalism, where human life is deemed expendable in the pursuit of monumental wealth for the few.

This little girl is 9-year-old Mercy Kennedy in Monrovia, Liberia grieving her mother who died after being taken away in an ambulance to an Ebola ward the previous day. Mercy walked around in a daze in her nightgown & flip-flops & was found by neighbors following the sound of her wailing. This small child’s grief is only a fraction of the cost of indifference, racism, & neoliberal colonialism.

What can we do to resist this? We can demand Obama withdraw the troops from West Africa & deploy medical personnel.