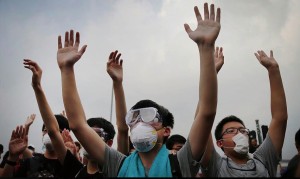 Judging by the twitter-sphere, thousands of people around the world & some media saw images of protesters in Hong Kong making this hands up gesture & concluded it was the influence of protesters in Ferguson who made famous the “Hands up, don’t shoot!” gesture against police violence.

This is when media really struts its investigative powers. The same media sources unwilling to give a coherent explanation of the Israel-Palestinian conflict in 66 years really went to town getting to the bottom of this gesture. Was it mimicry? Solidarity? A coincidence? Or just the traditional gesture of surrender against the threat of police violence? Of course, to corporate media that solidarity thing would be of most concern.

When you follow out the media investigation, you understand why news is so inscrutable, but mostly unreliable. To debunk any notions of influence, one often-quoted reporter says she interviewed two Hong Kong protesters in a crowd of 300,000 & they said, “Nope, there’s no relationship to Ferguson.” Well that settles it then. Another protester claimed the gesture was advised by protest organizers against police brutality & had no connection to Ferguson. Define “connection.”

Media parsing of this gesture was almost comical. “Almost” might be too equivocating. One claimed the influence could be subconscious from watching Ferguson protests on the news. One reporter said there’s no relationship between use of the gesture in the two cities because in Ferguson it was defiance against police violence & in Hong Kong it was functioning as a “simple symbol of defiance”. Knock, knock, is anybody home!?

But for farce in vetting this story nobody outdoes Hot Air, the Islamophobic blog associated with Michelle Malkin, the nasty-assed racist & right-wing libertarian who has distinguished herself with anti-immigration xenophobia. Citing the same two Hong Kong protesters as proof, the appropriately named Hot Air claims “there aren’t even tenuous links between the actions of the Hong Kong protesters & those who demonstrated in Ferguson.” Define “tenuous.” Couldn’t they even cede to that subconscious thing? Then this racist xenophobic site accuses those who claim otherwise of “cultural chauvinism” for assuming Hong Kong protesters are engaging in “mimicry.”

But racism will out & Hot Air blows it in the final riposte when it says: “There may be a larger issue exposed by this lazy display of appropriation on the part of so many. It might have simply been an honest mistake born out of the presumption that the world revolves around American domestic affairs, but it may have been a reflection of the need some have to confirm that the events in Ferguson were, as we were so often told in August, transformative.” One can almost hear the sneering at the Black community in Ferguson. To Malkin & her troupe, the US foreign policy of putting down Muslim terrorists is pivotal & the struggle of the Ferguson Black community against police violence just a local rebellion not worthy of news coverage.

It really doesn’t matter if the “hands up, don’t shoot” gesture in Ferguson influenced democracy protesters in Hong Kong because it resonates with millions of protesters around the world facing extreme police violence. It is now a political symbol of rebellion to injustice & will always be associated with Ferguson–& now Hong Kong. It was brilliant in Ferguson; it is brilliant in Hong Kong because it transformed a symbol of surrender into one of defiance against tyranny.