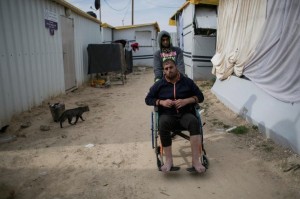 Samir al-Najjar became wheelchair-bound after being shot by Israeli soldiers in 2008. He & his family live in temporary housing in Khan Yunis, Gaza, since their home was destroyed by Israeli bombers in the 2014 carpet bombing siege. “We live–but that’s only because we’re not dead,” al-Najjar said.

It really is justice time for Palestinians. Build & honor the economic, cultural, & academic boycott of Israel. Check every label & buy nothing with a barcode beginning 729. Solidarity is imperative.