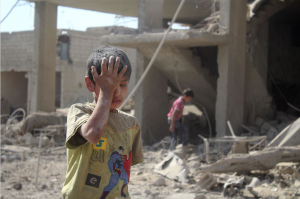 This is one of the hundreds of photos of Syrian children targeted by Syrian & Russian bombers which did not go viral. The little boys here are near the debris of a building bombed by Syrian warplanes in a district of Damascus on August 12th. Twenty-seven people were killed & 100 wounded in that airstrike.

The death toll in five years of civil war is nearly half a million people & the estimated number of refugees nearly three-million. That makes it one of the most horrific & monstrous wars of this historic period.

Instead of pissing contests on social media, what is needed is teach-ins, debates, & panels representing all the conflicting points of view so that antiwar & human rights activists around the world understand what is happening & what politically must be done to end the war. That is an imperative not resolved in mutual exchanges of insult on FB & Twitter.