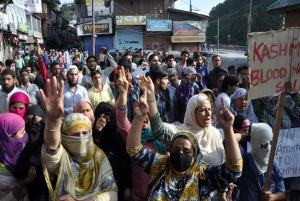 Today is the 51st day the Indian army has imposed a curfew & other martial law restrictions on Kashmir. Curfews are a total lockdown placing the entire population under house arrest & restricting freedom of movement. It’s used frequently & flagrantly by the Israeli occupying army in the West Bank.

International law doesn’t adjudicate much about curfews which are collective punishment, but it does about restrictions on military occupations–as if international law restrained barbarism in any of the several countries under foreign occupation by the US, Israel, Russia, & India in Kashmir. Long-term occupation is a military norm under neoliberalism, the barbaric phase of capitalism.

The death toll in Kashmir is now 68 with one media source reporting up to 11,000 injured. The curfew has not deterred Kashmiris from coming out in the streets to protest. This photo is one of the many protests against the occupation in Kashmir.