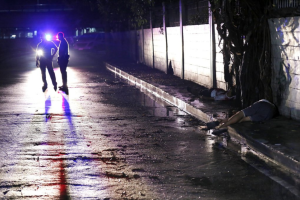 This is the scene after a police operation against illegal drugs in Manila, Philippines: two dead people who may or may not have been dealers or even users.

Filipino president & thug-in-chief Rodrigo Duterte has threatened to declare martial law if the country’s judiciary interferes with his vigilante war on illegal drugs. He has already engaged police, vigilante squads, & now the military in this campaign.

But shooting down alleged small-time drug hustlers & more likely drug addicts in the street has nothing whatsoever to do with addressing drug trafficking in the Philippines or anywhere else–& Rodrigo Duterte knows that.

There’s another political agenda going on here having nothing to do with drug peddling but with terrorizing the Filipino people into compliance with the re-militarization & neoliberal transformation of the country which is impoverishing millions of working people.

Our fullest solidarity with the struggle of Filipino activists against this vigilante war.