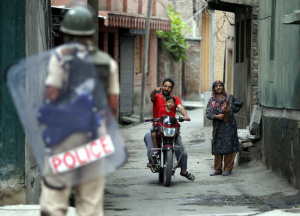 This is what passes for coverage of the barbaric siege in Kashmir: an Indian paramilitary thug stopping a man & his child on a motorbike “during curfew like restrictions” in Srinagar. What exactly are “curfew like restrictions”? This might be a new threshold in military double-talk. Is curfew-like something like being dead-like or pregnant-like? Is it some middle zone where you’re ordered to stay home but if you violate the ban they won’t fill you full of buckshot like they did the young worker biking home from work?

Why are this man & his child being stopped? Is there any suggestion they are fleeing a crime scene or headed to create one? Or is harassment the very character of occupation? Is he out & about during a curfew to buy provisions or medications? Why is it necessary to stop him?

Reportedly, schools & colleges, businesses, banks, professional offices & most government offices remain closed & public transport not operating but is that a result of those “curfew like restrictions” or of calls by independence groups to shut down the country in protest?

The media narrative repeated ad nauseam is that Kashmiris rose up en masse after the execution of Burhan (the man whose name cannot be mentioned on FB without denouncing him first for terrorism). His murder may have been the trigger event but summary executions of Kashmiri activists in staged shootouts with paramilitary thugs were almost daily news for a long time & Kashmiris must have been seething with outrage at the executions of so many idealistic young.

Our fullest solidarity with Kashmiri self-determination. End the occupation.