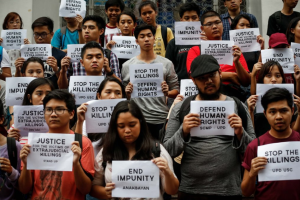 Drug use is a social & a health problem, not a crime, regardless of one’s moral judgement about it. What Duterte is doing is modeling the US war on drug policies that led to summary execution of hundreds of Black youth, the incarceration of thousands (often for life without parole), & martial law in the Black community.

Those involved in criminal drug trafficking have the right to due process even if the entire nexus of drug traffickers from transporters & processors to bankers laundering trillions of revenues escape investigation & prosecution. If they were prosecuted, entire national economies & banking systems would collapse, including in the US. So it is small-time hustlers who are mainly targeted.

Duterte is a thug, a hit man with what he thinks is an electoral mandate for mass murder. Since his election one month ago, over 800 suspected drug users have been executed with not just impunity but his encouragement. That’s about eight people a day. That’s a bloodbath. Reportedly 600,000 people have also surrendered to authorities in the past month. If there’s a single money launderer among them it would be a first in drug trafficking history.

You can detest drug trafficking & deplore drug use but in civilized, democratic societies drug peddlers have the right to due process & addicts to health services to address their problems, which certainly include detoxing, nutrition, housing, employment, & for the 1.5 million homeless children in the Philippines, counseling to deal with the grief & trauma of their lives.

Yesterday, Filipino students in universities throughout Manila held simultaneous candle light protests demanding the end of extrajudicial killings. Our deepest respect & fullest solidarity with them for standing up against the murderous regime of Rodrigo Duterte who should be charged with well over 800 murders & human rights crimes violations.