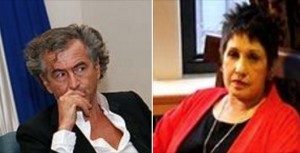 Few people inspire so much loathing as Bernard-Henri Lévy & Phyllis Chesler–haters of Islam & among the most vituperative defenders of Israeli apartheid. Lévy, who positively stinks of elitism & misogyny, defended Dominique Strauss-Kahn against charges he raped a NYC hotel maid in 2011. In a colossal misjudgment of US courts, he ranted against the US legal system that would treat DSK just like “any other person.” In the inscrutable parlance of his “new philosophy,” he said “Everybody is not everybody.” You tell ’em Bernie!

Chesler is a well-known feminist who once wrote unreadable books about women’s psychology & now writes volume after volume of hateful screeds against Palestinians & Islam. In hatred, she has proven indefatigable. She recently wrote a piece calling Palestinian supporters & BDS activists “brownshirts.” Her schtick is to align feminists with Israeli apartheid.

Where the fop & the feminist-gone-sour find affinity is in the depths of their social hatred, in Islamophobia, in commitment to ethnic cleansing of Palestinians. When they open their mouths, you can’t tell them apart.