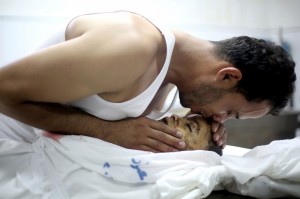 This photo was chosen as one of the Guardian-UK’s best for 2014. It stands as another denunciation of Israel’s pernicious claim that Palestinians in Gaza used their children as human shields. That claim was echoed in an ad placed in several newspapers, including the Guardian-UK, by Elie Weasel. The Weasel once said he “swore never to be silent whenever & wherever human beings endure suffering & humiliation. We must always take sides. Neutrality helps the oppressor, never the victim. Silence encourages the tormentor, never the tormented.” He can stuff his self-serving grandeur now that he’s exposed for helping & encouraging the oppressor by pretending Israeli war crimes against children are justified.

The photographer explained this child was killed by Israeli bombing of the family home in Gaza City on July 20th. The young man crying over his body is his brother, Rafik Ashraf Ayyad. Their father, who was also injured in the bombing, was in the same hospital & they carried the body to him so he could say goodbye. The child was buried without funeral ceremony due to the continued intensity of the bombing.

There is no more powerful damnation of Israeli war propaganda than this photo except to say ‘may those who repeat it rot in hell.’
May the child RIP. And may we continue to build the economic & cultural boycott of Israel (barcode beginning 729) & demand no military aid to Israel.