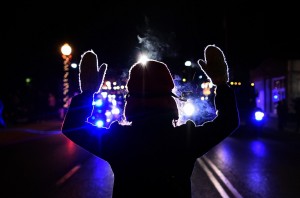 This photo from Ferguson, Missouri was also chosen by the Guardian-UK as one of the best from 2014. The photojournalist doesn’t give a date but because the protester is wearing mittens we can assume it’s part of ongoing protest this winter & not from last summer. The photographer also doesn’t seem to get what is going on in Ferguson since she said, ““I took this picture the day after the violent protest turned into riots in Ferguson, Missouri. The police were trying to disperse a crowd & warning they would arrest anyone gathering on the street.” What interested her in the shot was the contrast between the iconic gesture of “Hands up, don’t shoot” & the police lights. Maybe one ought not cover such events if aesthetics are of more concern than the momentous & historic.

This woman protester defied police orders & moved into the middle of the street before the police advance & was arrested. Protests which stand on the Bill of Rights to defend Black youth from police violence don’t get violent or riotous until militarized riot cops attack them. If the photographer doesn’t get that, she should stick with kitty portraits.

We should take a moment to honor the Black community in Ferguson for changing the political landscape in this country, for exposing for all the world to see the crimes being committed against Black teens by police, government, & school officials. The NYPD & media are now crying crocodile tears that the emerging civil rights & Black power movement is endangering the cops. That movement in Ferguson, NYC, & elsewhere is responding to the charge with the derision & contempt of a Bronx cheer (Also called a raspberry & done with the mouth it makes the sound of a fart. Nothing could be a more appropriate response.). They aint seen nothing yet.

Judging by our selection of political leaders & US military policy, many people around the world think the US population not just slow on the uptake but genetically & politically damned in some way. Ferguson has changed that too, showing that opposition to injustice & tyranny is not just part of our history but is possible again.