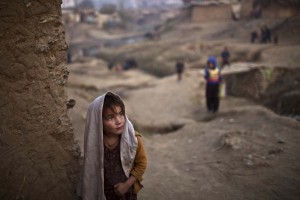 This is another magnificent image of an Afghan refugee in Pakistan by Muhammed Muheisen who covers the Middle East as an AP photojournalist. He has extensive albums of Afghan, Palestinian, Syrian, Pakistani refugees & has a distinguishing sensitivity to his work. It’s not known if being born in Jerusalem (1981) plays any part in his aesthetic; it would be hard to think it didn’t.

Much of his work focuses on children & elderly; in fact, much of photojournalism does because war, colonialism, poverty, dispossession, dislocation & neoliberal barbarisms of all kind fall hardest on children & vulnerable elders. As we saw in the Israeli siege of Gaza, the Israeli occupation of East Jerusalem & the West Bank, the Taliban massacre in Peshawar, & police violence against Black teens in the US, children are often the targets of barbarism.

The UN has a ceremonial day dedicated to children in November every year. That’s not enough for those of us with no attachments to the status quo & who want to see human beings triumph over the scourge of social hatred & war. So we should dedicate the coming year (or for that matter, the rest of our lives) to making the world–not heaven, not utopia–but suitable for children to come of age in, where they can grow up in harmony with each other & with nature. (It may be too much to ask that teens be in harmony with parents. That’s for another generation.)

At least we can work to end US wars so this small child & her family can go back to Afghanistan where they belong.