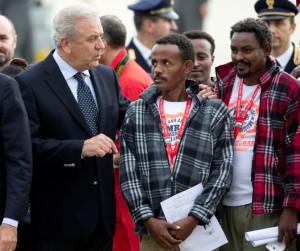 The classy-looking fool on the left is the EU’s commissioner for immigration patronizing this Eritrean refugee for a regrettable photo-op where he comes off not looking suave but like a jackass. The looks on the three men’s faces can only be called priceless–or even revenge.

The ever-so-suave jackass is making a big production of seeing them off to Sweden as part of a group of 19 Eritreans granted asylum there. Nice job EU. In several months, that’s 19 down, 499,981 to go.

What’s not amusing is that behind the smarmy photo-op, thousands of refugees will be deported back to their home or a third country without due process.