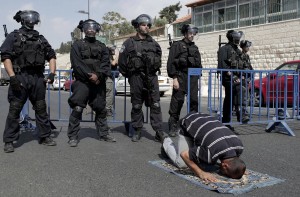 Since Israel has for many months denied men under 50 years-old entry to Al-Aqsa mosque, they gather to pray in the public streets. Now, with Israel’s violent rampage against Palestinians, there are scenes like this all over occupied-East Jerusalem: steroidal riot cops standing over men kneeling in prayer. This man is in Ras al-Amud, a neighborhood of East Jerusalem long a center of conflict between Israeli settlers & Palestinian residents.

There is nothing about this current Israeli rampage that is not alarming. There is a video of an Israeli Palestinian woman in a gas station with her hands in the air as she is circled by several Israeli cops with assault weapons who shoot her in cold blood. That is what’s going on–not Palestinians rising up with knives in their hands stabbing innocent Israelis, as much of media reports.

This rampage is a provocation to Palestinians so Israel can justify coming down with the full force of their arsenal on unarmed Palestinians to destroy political resistance to apartheid, ethnic cleansing, incarceration & torture in the gulag, the blockade of Gaza, & dispossession.

Emergency rallies are imperative along with building the economic, cultural, & economic boycott of Israel (BDS) & demanding no aid of any kind to apartheid Israel.