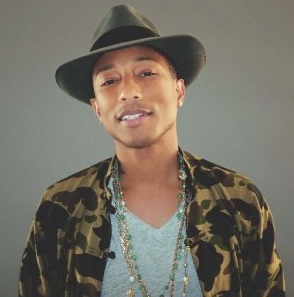 Pharrell Williams is turning out to be a whopping political disappointment. If he doesn’t smarten up he will be associated less with his song “Happy” than with his music to “Despicable Me.”

Despite appeals to him to honor the cultural boycott of Israel, he is still scheduled to perform in Tel Aviv in early September. There is still time to persuade him by going to his wall & leaving messages. But if our man–who operates a foundation with the mission to “change the world one kid at a time”–remains indifferent to the suffering of Palestinian children, he will be facing the music when he continues his tour in South Africa later in September.

Williams has a marketing collaboration with Woolworths, one of the largest retail chains in South Africa which trades with Israel & sells Israeli products. According to BDS South Africa activists, the marketing campaign called ‘Are You With Us?’ is an attempt to counter the boycott campaign initiated against Woolworths last year. Last month, BDS South Africa sent an appeal to Williams asking to meet with him & to honor the boycott by canceling his performances in Cape Town & Johannesburg.

BDS doesn’t like to give up on anyone prematurely & we hold out, hoping our appeals to their human decency & sense of justice will persuade. And if they don’t, muscle gets applied in the form of protests & rallies. According to BDS South Africa activist, Braam Hanekom, if Williams performs “He is about to face the biggest backlash any artist has faced in South Africa in over 30 years, since the days of apartheid….He is walking into a very angry, unhappy environment because he has chosen to walk with Woolworths.” Protesters won’t be chanting Happy patter; it’ll all be about Mr. Despicable.

The city of Cape Town denied an application to protest at William’s first concert on September 21. Hanekom said protesters may block roads leading to the casino where Williams will perform, delaying the performance, or may even rally inside the casino. Williams is taking quite a gamble with his reputation. But if he performs in Tel Aviv, it’ll be shot to hell by Cape Town anyway.

Pity for Williams. He won’t be the first to bite the dust. Give the man a chance & go to his wall to make appeals to ‘change the world one concert at a time.’