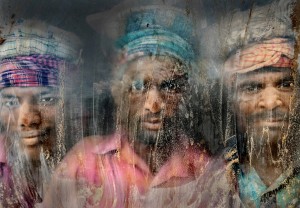 Stunning photo, isn’t it? Remarkable faces. Looks like an idealized portrayal of the three Magi from the Bible. In fact, this photo, which won second place in the 2015 National Geographic Photo Contest, is three gravel workmen in Chittagong, Bangladesh looking out the window of their workplace which is full of dust & sand.

Petrobangla is the state-owned national oil, gas, & mineral company in the country but unfortunately it makes subcontracting agreements with international companies for exploration & development. That would partially explain the massive oil spill last December in the Sundarbans, the world’s largest mangrove forest lying roughly one-third in India & two-thirds in Bangladesh. When these ruthless companies are finished with Bangladesh, it will look like the Niger Delta & be as toxic as the Gulf of Mexico.

The government also owns all the mineral properties of the nation & long ago formulated policies & rules “to achieve sustainable development.” But as part of the neoliberal capitalist system, they’re also trying to attract foreign investment in the mineral sector & that means that sustainable development thing goes down the drain. Now there are proposals to amend those mines & mineral policies “to meet the demands of the present day” & to simplify “procedural obstacles” to attract foreign private investment. Of course the biggest procedural obstacle of all is labor rights, especially health & safety protections on the job, & any bans on child labor.

You don’t necessarily die young from silicosis; sometimes you just live a miserable, incapacitated life–especially if you live in a country with a neoliberal health care system making it unavailable to poor working people.