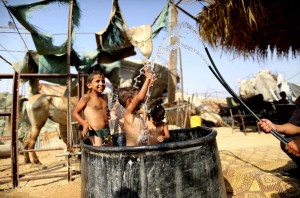 This is Beit Hanoun, Gaza, where Israeli bombers took out a school serving as a UN refugee center in July 2014. There were 800 people in the school, mostly women, elderly, & children. The bombing attack killed 16 & wounded at least 150 others (probably more). “Wounded” is a vague term covering a multitude of Israeli war crimes. It means small children were punctured with shrapnel, suffered damage to internal organs & eyes, were psychologically terrified, & their mothers (if they survived) had to witness their suffering. All the while, Israel & its stooges like Elie Wiesel were claiming Palestinians use their children as human shields.

The water, sewage, & electrical systems in all of Gaza were badly damaged by Israeli bombers. The only power plant is operational again but because of irregular fuel supplies (controlled by Israel), there are only a few hours of power per day. Repairing sewage & water pipes & wells was prioritized because one of the main health concerns in Beit Hanoun was keeping sewage out of the drinking water–which would place 50,000 people at risk.

And of course, like the rest of Gaza, the housing in Beit Hanoun remains completely bombed out. One of the remnants of a cement wall is the site of a Banksy mural of a kitten.

Despite all the impediments to reconstruction put up by Israel, some repairs have been made–evidenced here by children in Beit Hanoun beating the heat by being hosed down in this makeshift pool.

Israel isn’t through with Gaza yet. And that makes the work of building the economic, cultural, & academic boycott (BDS) of Israel all the more urgent. The struggle against Israeli colonialism is one of the most important struggles in the world today because the unholy alliance of Israel with US, European, & Indian militarism threatens to turn the entire Middle East into a killing field–& because Palestinian Intifada stands as a beacon of resistance to suffering humanity around the world.

Build the hell out of BDS.