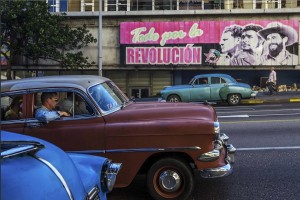 You know the US is up to no good in its rapprochement with Cuba around the recent prisoner exchange. Obama & Cuban president Raul Castro announced plans to reestablish diplomatic relations, including a US embassy in Havana, & the US will loosen travel restrictions, though tourist travel will remain banned. This allows for the free flow of CIA agents to Cuba to replace the one Cuba just released. Obama also announced a review of Cuba’s status as a terrorist state, which is good but not earth-shattering, since the only thing Cuba has trained & sent abroad for decades is doctors.

At the same time, Obama agreed to ask Congress to remove the economic embargo which has been in place since 1960 as a way to topple the Castro regime. You’d think this move would have Cuban exiles in south Florida in a frenzy but pollsters report anywhere between 70% & 90% are now in favor of ending the embargo. Not because they want to stop putting the squeeze on the Cuban Revolution that sent them packing but because the embargo has proven ineffective & they have other connivances up their sleeve.

It’s astonishing that media from the NY Times to right-wing exile press continue the mantra that Cuba is a police state & one of the most repressive regimes in the world, up to its eyeballs in human rights abuses. You’d think US media would be circumspect in such damnations only a week after the release of the report on CIA torture at Guantanamo & as awareness of police brutality against the Black community circles the globe. It appears temerity is a necessary part of propaganda. Or could it be these media were thinking of Guantanamo, the US-controlled part of Cuba?

Michael Moore is no communist but in “Sicko”, his 2007 documentary on health care in the US, they had to bring 9/11 first responders to Cuba to get necessary health care they could not get in the US. No one in Cuba dies from lack of health care. And no one lives on the streets.

Cuba has huge political problems, in no small part due to the embargo, so it is a monumental advantage to get the embargo removed. What compromises Cuba is asked to concede, & what it will agree to, remain to be seen. Despite its problems, the Cuban Revolution remains a beacon for the oppressed around the world & we need learn from its achievements & its failings alike.

The photo is a classic American car in Havana. Because of the embargo, Cubans have had to be extremely inventive & “sustainable” with resources. As a result, they have made important innovations & contributions, including in such fields as Chinese herbal medicine.