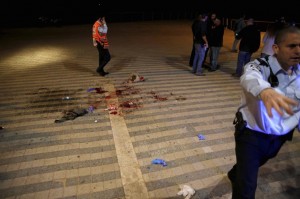 Media today is bursting with headlines like “Palestinian kills US tourist in stabbing spree on Tel Aviv boardwalk” & “US student dead & at least 13 others injured in attacks across Israel.” The problem with the reporting about three separate attacks is the dearth of information. There’s all sorts of extraneous filler in the articles about what rightwing Israeli politicians had to say; that Joe Biden’s family (he is visiting the immediate area for talks with Shimon Peres) were dining on a nearby beach; & a non sequitur about Netanyahu’s alleged snub of Obama.

The incident of particular interest is the Palestinian man, now reportedly shot dead by Israeli police, who stabbed 10 people in a “stabbing rampage.” Some reports say he was running down the boardwalk; other reports say “he was running along the Tel Aviv beachfront stabbing pedestrians & motorists stuck in traffic.” We’d just like to know how one person could manage to stab so many people since the logistics seem improbable; stabbing someone takes quite an effort. Did he just brandish a knife or actually skewer them?

The Guardian-UK says “Initial accounts of the attacks were confused & contradictory.” You bet your sweet ass they were. They still are–even within the same article in the Guardian. What’s curious about that is the Israeli police are usually media’s only source of information. Can’t the police get their story straight?

According to the Guardian, the assailant, who was shot dead trying to flee, was later identified as a 22-year-old Palestinian man from Qalandiya. They know his age & where he’s from, but not his name? There was apparently another incident in occupied East Jerusalem where a Palestinian “gunman opened fire on Israeli police” before being shot dead by police. Other than his name, Fouad Tamimi, & age (he was 25), there is no other information. The third incident of an alleged stabbing in Petah Tikva near Tel Aviv isn’t described at all. What kind of sloppy-assed reporting is that!?

The Guardian (which functions as the rightwing Jerusalem Post’s European edition) says these latest attacks ‘come after months of violence in Israel & the Palestinian territories in which 183 Palestinians & 28 Israelis have been killed since October.’ Well we’d sure like them to explain the differential there because the rate of Palestinians killed is nearly seven times that of Israelis & yet all the news coverage is about that alleged “stabbing Intifada.” Stabbing Intifada, my ass! There is a pogrom against Palestinian youth which media refuses to report.

We would like to know about those 183 Palestinians killed. Israel also claims 121 of them were knife assailants. We want reports on the circumstances & the forensic results along with an explanation for why Israel won’t return the bodies to Palestinian families for respectful burial. But as we see, vague allegations better serve propaganda.

We regret if Palestinian youth actually did use a knife or gun because those Israelis injured are not the ones calling the shots in Israel. But color us skeptical as all get-out until we get confirmation from Palestinians. If Israel can’t provide names & forensic details that can be verified, the assailants could just as well be Israeli agents provocateur. It’s been done before.

Photojournalism on these three alleged incidents are also scanty & journalistically embarrassing.The caption to this photo (the typos are all theirs) says: “An Israeli policeman clear the spot where, according to Israeli police spokesperson, at least 10 Israelis were stabbed, in the popular Jaffa port area of Tel Aviv, Israel March 8, 2016.” Were they all stabbed on that spot?

Build & honor the economic, cultural, & academic boycott of Israel (BDS) & demand no US aid of any kind to Israel.