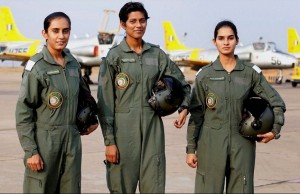 These are India’s “first batch of female fighter pilots.” There’s a militarist trend in journalism promoting the notion that women in elite military units are a sign of women’s advancement. They made a spectacle of the first Muslim woman fighter pilot & when women trained for US special forces.

There’s nothing laudable or progressive in training a handful of women to bomb or terrorize other people. That is no measure of women’s progress but of tokenism & giving a softer, gentler face to military barbarism. The only measures worth a patoot are the elimination of sweatshop economics, the end of violence against women, & the end of discrimination in every sphere of economic, political, & social life.

We’re going to hear all that elitist feminist baloney played out in campaigning for Clinton as the first woman president. It isn’t good enough she’s female. So were Margaret Thatcher & Indira Gandhi; so is Angela Merkel. They only prove that gender is not the decisive question but politics are & which side you are on.