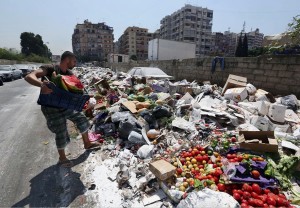 A primary demand of Palestinians is the right of return for millions of refugees–not only from the 1948 expulsion but from the 1967 occupation of Gaza, the West Bank, & East Jerusalem, & the ongoing internal displacement of thousands whose lands & homes are being expropriated by Israeli settlers. Most of the refugee camps are located in Gaza, the West Bank, Jordan, Lebanon, & Syria (where they are now under attack by ISIS & the Assad regime).

There are over 7 million Palestinian refugees worldwide. Over 4 million are registered for humanitarian aid with the UN refugee agency; nearly 2 million are unregistered & ineligible for aid. About 355,000 Palestinians inside Israel & nearly 60,000 in the occupied West Bank are internally displaced after their homes & villages were demolished & confiscated or their residency rights revoked. This is a current political & humanitarian crisis, not a historical problem.

Syria had about 600,000 Palestinian refugees in Syria with the Yarmouk camp near Damascus being the largest. Since April, the Yarmouk camp has been under siege by both ISIS & the Syrian army. Lebanon has around 250,000 Palestinian refugees living in squalor & poverty in 12 officially recognized camps. This man outside the Sabra camp near Beirut is throwing trash on a roadside dump covered with white pesticide blowing freely in the wind, creating health hazards for people already living in poverty. Unemployment, overcrowding, lack of ventilation, inadequate garbage collection, poor water & sewage systems make the camp a breeding ground for disease. The Sabra & Shatila camp is the site of a 1982 massacre by right-wing Lebanese paramilitaries & the Israeli & Lebanese armies. An estimated 3,500 Palestinians were slaughtered.

One Zionist source claims the refugee issue has “been deliberately exploited by Arab & Palestinian politicians in their war with Israel.” There’s hardly a need to “exploit” an issue that is the very heart of the colonial conflict with Israel & the creation of a Jewish-only state. Colonialism speaks for itself. Seven million Palestinians are living in stinking refugee camps subject to massacre while Jews living anywhere in the world can claim Israeli citizenship under the Law of Return & take up residence on Palestinian land. The Palestinian refugee problem isn’t going away soon & will remain at the heart of the conflict until Israel is forced to abandon its colonial project.