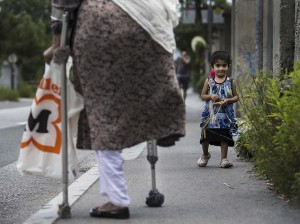 Emancipation US-style: this Afghan woman with her grandchild is living in a refugee camp in Austria. The caption to the photo said she lost her leg in Afghanistan by an improvised explosive device (IED). That would be to suggest it was by the Taliban when more likely it was by one of the estimated ten million landmines (or other unexploded ordinance) studding the country dropped from helicopters by the ex-USSR, US, UK, Belgium, & Italy.

There are two different kinds of landmines: anti-tank & anti-personnel. The most notorious, dropped in millions by the USSR, were called butterfly mines. They were designed to flutter to the ground without exploding but one wing was filled with liquid explosive designed to ignite on contact. Thousands of children thought they were toys or butterflies & lost their limbs.

This has made Afghanistan one of the most contaminated countries in the world from mines–including in cities not just strategic military targets like airports, government installations, & power stations. Kabul is the most heavily mined city in the world.

This alone should give pause in lauding the USSR’s occupation as an emancipatory event. You can quote Mao Tse Tung till the cows come home, but power doesn’t always come from the barrel of a gun. That’s the mantra of a fool who doesn’t want to do the hard political work necessary to change the world.