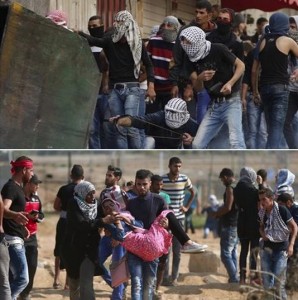 The photo on the top is Palestinians in the West Bank shielding themselves behind a dumpster armed with a slingshot against one of the mightiest military powers in the world. The bottom photo is the protest today near the apartheid fence in Gaza which was fired on by Israeli soldiers. The young woman was overcome with tear gas & is being evacuated to safety.

There’s no need to romanticize Palestinians. They have more than earned their place as one of the most important freedom struggles not just against colonialism & apartheid, but in all of human history.

When we say “We are all Palestinians,” it is not only to render solidarity with them but to honor them as our teachers in what it takes to finally end colonialism, racism, exploitation, social hatreds of all kinds & to make this world suitable for human beings to live & love in, a world where we live as brothers & sisters.

Build the economic, cultural, & academic boycott of Israel & render every possible solidarity to the Palestinian struggle.