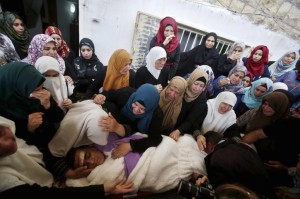 Israel could not have carried off the terrorist occupation of Palestine for the past 67 years without the direct collusion of media, including films like “Exodus,” which glorified the death squad expulsion of 700,000 Palestinians from their homeland. Media continues their commitment to Israel in the current rampage against Palestinians in coverage that is as simple-minded as it is dishonest. Simple-minded, because the impact of BDS & social media, along with sources of independent journalism, have completely altered the political landscape. Lies don’t fly so easily–though that hasn’t stopped media from putting them in orbit.

The photo of the unarmed older Palestinian man in Hebron facing off with Israeli soldiers is a classic case of media deceit. As a video of the incident shows, he was in fact angrily confronting a group of soldiers. The video is just over a minute long & ends when he is shot down in cold blood. It’s not certain that he died; it’s not certain who shot him. But the media caption to the photo is all about the spread of alleged Palestinian stabbings of Israeli civilians & soldiers & Palestinians ‘spiraling out of control.’ At no time did he brandish a weapon & vociferously objecting to a brutal pogrom is not a provocation to shoot him down.

So when we read in Reuters that Mohammed Jabari, the young man being mourned & buried here “stabbed an Israeli policeman before being shot dead on Friday,” we don’t buy it. Nor do we actually care if he did attempt to stab the policeman because when one of the most sophisticated military forces in the world goes after unarmed protesters with tanks, tear gas, grenades, & high-powered rifles, those being assaulted have a right to defend themselves by any means necessary.

With all the alleged violence against Israeli soldiers & civilians, we await a report on fatalities & injuries which has not been forthcoming because it would likely be a mockery of reality & entirely fabricated. The violence going on is all Israeli soldiers & armed civilians going after unarmed Palestinians–& the evidence of that is replete despite media deceit.

Our deepest condolences to those suffering the loss of beloved family & friends. May the deceased Rest In Peace. Our fullest solidarity & commitment to build the economic, cultural, & academic boycott of Israel & to demand no aid of any kind to Israeli ethnic cleansing.

This is video of assault on Palestinian man referenced in this post:

Posted by Images From Palestine on Saturday, October 10, 2015