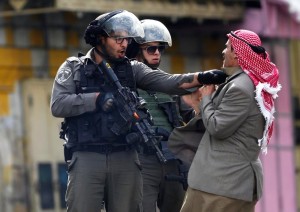 Are these Israeli soldiers roughing up this man in Hebron & sticking an assault rifle in his face just for the hell of it? Or has he committed some crime? They must have thought he had a knife in his pocket & was going to stab one of them since the caption says “stabbing attacks against civilians & soldiers have spread across Israel & the West Bank in the past week.”

The problem with this narrative dominating all of media is the only fatalities in these stabbings are the Palestinians alleged to be the perpetrators. Dead men can’t bear witness? It would be really important–if Israel wants to even look justified in its rampage against Palestinians–if they could show a single photo of one of these incidents or Israeli victims. How serious are the injuries? Was anybody hospitalized? Did any Israelis die as a result of stab wounds? Are there any funerals we should know about? Or is it all just malarkey?

The caption goes on to say that “increasing protests by Israel’s own Arab minority has raised fears of the unrest spiraling further out of control.” You see how that works? The Israeli military & extremist thugs lay siege for weeks to the Noble Sanctuary & attempt to vandalize Al-Aqsa mosque; assault Palestinians with rubber-coated metal bullets, stun grenades, pepper & tear gas all over East Jerusalem & the West Bank; shoot down at least 20 Palestinian protesters & injure 1,000; fatally shoot protesters across the apartheid fence in Gaza–but when Palestinians protest the violence & aggression, they are ‘spiraling out of control’.

Emergency rallies are imperative across this globe demanding no aid of any kind to Israel & that Israel end the occupation. Build the boycott of Israel to stand solidly with our Palestinian brothers & sisters. We are all Palestinians!