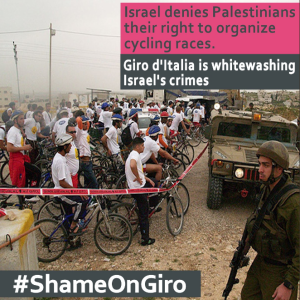 The group Cycling Palestine called on Palestinian cyclists to protest the 2018 Giro d’Italia tournament by biking from Ramallah in the West Bank to the Qalandia military checkpoint. The photo in this meme shows Israeli occupying forces at the checkpoint trying to shut down the cycling protest. This may be the first time in human history that cyclists have been considered a political threat as terrorists. There are also confirmed reports that Israeli police are notifying & threatening Palestinian activists if they protest at the tournament.

The Giro passes through occupied East Jerusalem where the Al Aqsa mosque compound is. Cycling Palestine issued a statement that said: “The Giro d’Italia European cycling tour will only serve to legitimize the annexation of Jerusalem & to distort the authenticity & character of the city. It will also turn sports from a noble & uniting tool into a whitewashing machine of Israel’s crimes & occupation. By organizing such an event, Giro d’Italia is being complicit in Israel’s military occupation & its egregious violations of international law, conventions & consensus. We must not allow Israel to use sports tourism & construct a democratic image at the expense of the Palestinian people & their rights.”

If we do our job right to build solidarity with the Great Return March, the Giro d’Italia will end up as thoroughly discredited as a sporting event for its role in whitewashing Israeli apartheid & genocide.