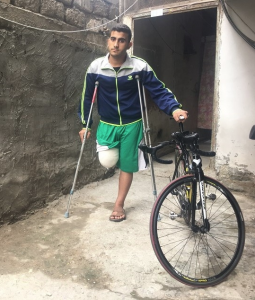 It is not just grotesque but politically psychopathic for Giro d’Italia to hold its annual three-week cycle race in Israel, cycling within kilometers of Gaza whilst Israeli snipers are positioned at the apartheid fence directly shooting unarmed protesters in the legs, disabling some for life. Several young Palestinians have had their legs amputated. It’s macabre & loathsome that Giro d’Italia would be part of whitewashing, or “sport-washing” Israeli crimes against Palestinians at the very same time as the Great Return March when 42 have been killed & about 6,000 have been injured.

The Giro d’Italia, along with the Tour de France & Spain’s Vuelta, is one of the world’s three major cycling tournaments. It’s usually held in Italy & seldom elsewhere but this year Israel & a Canadian Zionist settler to Israel named Sylvan Adams spent a combined $28.3 million to bribe Giro officials to hold it in Israel. The Boycott, Divestment & Sanctions movement appealed to Giro officials to honor the cultural boycott & were rebuffed. In the annals of human history, Giro d’Italia has just written its own obituary.

The 1936 Olympics, otherwise known as the Nazi Olympics, come to mind. They were held at the same time that the fascist, militarist regime of Adolf Hitler was conducting a furious campaign to ‘purify’ the ‘Aryan race’ that would lead to the death of millions of Jews & Roma in concentration camps. The Nazis used the Olympics to whitewash what was going on in a process called the “Nazification of sport.” The invidious comparison of the 1936 Olympics to the 2018 Giro d’Italia race is inescapable.

This is 21-year-old Alaa al-Dali, one of the young Palestinians at the Great Return March who was shot in the leg by an Israeli sniper on March 30th & had to have his leg amputated. He is one of the several injured Palestinians denied medical treatment outside Gaza for injuries sustained in the Great Return March. The Israeli army decided “that any request for medical treatment by a terrorist or a rioter who took part in violent events would be denied.” Because Israeli bombers have targeted medical facilities in the several aerial assaults over Gaza & because they have taken out the only power plant providing electricity, it is necessary for Palestinians to seek specialized medical care outside Gaza. The thing about Alaa al-Dali is that he was a cyclist who had won several racing awards & was training for the 2018 Asian Games in Indonesia this summer.

According to Alaa al-Dali’s trainer Hassan Abu Harb & another sports official in Gaza, Israeli snipers are specifically targeting athletes to disable them. Abu Harb said five other Palestinian athletes in Gaza have also lost their legs since the Great Return March began. In the seven-week Israeli bombing siege of Gaza in 2014, 32 athletes were killed & 27 were injured. This resonates with the Nazi persecution of Jewish & Roma athletes, many of whom died in concentration camps.

We should stand with Palestinians, including their athletes, in exposing the sport-washing of Israeli apartheid & genocide by the Giro d’Italia. May the tournament takes its place in the hall of shame alongside the 1936 Olympics.