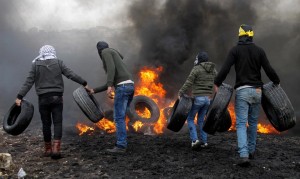 Recently, several media sources, including rightwing Zionist media, have circulated a poll taken in the West Bank by an outfit called the Palestinian Center for Policy & Survey Research (PSR) in Ramallah. The headlines read “Poll shows Palestinians support violence not diplomacy”; “Poll: 2/3 of Palestinians back stabbing attacks, armed uprising”; “Majority of Palestinians support knife attacks against Israelis, unless the attacker is a young girl”.

The director of PSR, Dr. Khalil Shikaki, said in an interview that he found the results of his poll “very frightening & pessimistic.” Since he only issued the poll as a press release, the methodology used is not available for scrutiny. However, it’s based on uncritical acceptance of Israeli claims that Palestinians are on a knifing spree while Palestinians claim knives are being planted on executed activists–a much likelier scenario.

Actually, when you look at the summary of the poll, it doesn’t seem at all frightening or pessimistic but in fact quite promising in several ways: Palestinian activists reject their politically corrupt & geriatric official leadership like Mahmoud Abbas–they want him out; a majority oppose the Oslo Accords; they don’t trust peace negotiations like the phony ones brokered by the US State Department & they prefer the popular resistance of Intifada. What’s such a downer about such clear political vision?

But there’s something not quite right about a research institute that would release this kind of inflammatory data at a time when Palestinians are being massively assailed by the Israeli military & settlers. Something even worse than not quite right, but outright treasonous to Palestinians.

A little closer look at who this reckless Dr. Shikaki is explains everything. He has an unsavory political history of collaboration. He once did a poll showing 4.3 million Palestinian refugees in their majority were willing to bargain away the right of return. Such a conclusion is not based on a scientific poll. He’s talking through his ass & we know that because it belies 68 years of Palestinian resistance to Zionist colonialism.

Not only is Shikaki director in absentia of the PSR, but he is a fellow at the Brandeis University Crown Center for Middle East Studies. The Crown Center was formed in 2005 by Dr. Shai Feldman, a former Israeli intelligence guy from the Jaffee Center for Strategic Studies (now named Institute for National Security Studies) in Tel Aviv. Feldman, Shikaki, & an Egyptian fellow named Abdel Monem Said Aly coauthored a book titled “Arabs & Israelis: Conflict & Peacemaking in the Middle East.” Doesn’t that just sound so collegial & peaceful coexistence-like?

Our man Feldman has given lengthy interviews about his views & his approach to conflict resolution & peaceful coexistence. He believes in the impossible dream that Israel can be a Jewish state & democratic too; he changed the subject to French-trained chefs & fiction writers in Tel Aviv when asked about Israeli settlers now controlling over 46% of the occupied West Bank; he defends the apartheid wall & the military occupation; he justifies turning Gaza into an open air prison. He’s a staunch rightwing Zionist who starts to blither when challenged about the contradictions of Zionist-think & resorts to cliches like “it takes two to tango” to justify Israeli violence against Palestinians.

If Shikaki & Feldman are colleagues, it can only be on the basis of betrayal by Shikaki. When his institute released this data, it was intended to discredit Palestinian Intifada, to make them look like knife-wielding terrorists rather than freedom fighters against apartheid, ethnic cleansing, colonialism, & terrorism.

Betrayers are a dime a dozen in politics. There’s big money in it. The only way to respond is to honor & build the economic, cultural, & academic boycott of Israel. Buy nothing with a barcode beginning 729.

While Shikaki is doing his peaceful coexistence thing, these Palestinians in Nablus, West Bank are conducting Intifada against Israeli settlements in Qadomem.