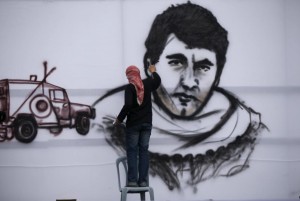 This Palestinian artist in Khan Younis, Gaza Strip, is painting a picture in tribute to Yahya Ayyash, the chief bomb maker of Hamas & member of the al-Qassam Brigades. Ayyash built bombs used in several attacks in Israel in the early 90s where about 90 people were killed. He was 30-years-old in 1996 when he was executed by Shin Bet, the Israeli secret service, who booby-trapped a cell phone that blew his head off.

Terrorism is a deplorable indiscriminate political method. Paramilitary terrorism & death squads are the very foundation of the state of Israel which displaced tens of thousands of Palestinians & drove them into diaspora & refugee camps. It continues as the chief method used against Palestinians by the Israeli military & settlers moving in on Palestinian lands.

For a brief period in the 1980s & 1990s, some Palestinians resorted to terrorist tactics against the behemoth of Israeli military might. It was a regrettable period, born of political desperation, because it punished civilians for Israeli state crimes & made it easy for Israel to take attention off terrorist expropriation of Palestinians & instead make them look like the aggressors.

The philosopher Spinoza once said “We study the past neither to laugh nor to cry, but to understand.” We also don’t study it to cook up apologetics for a bad strategy, which terrorism is in spades. But if we want to understand why some Palestinians would be disoriented & attracted to terrorism, we need to look at the context–including Israel’s successful use of terrorism. The early 1990s was the era of the Oslo Accords when respected leader Yassir Arafat signed an agreement brokered by Bill Clinton’s administration surrendering Palestinian self-determination. The agreement was not so much a bantustate proposal as the terms of Palestinian surrender which expressly rejected the return of Palestinian refugees.

Tens of thousands of Palestinians knew exactly what those Accords meant but overwhelming world opinion was against them because Arafat & Israeli prime minister Yitzhak Rabin signed them to thunderous applause. Arafat, Rabin, & Shimon Peres won the Nobel Peace Prize in reward for the betrayal.

It was also the period when Israeli settler terrorism against Palestinians was escalating. In February 1994, Baruch Goldstein, a rightwing settler from Brooklyn, NY, entered a mosque in Hebron & massacred 29 praying Palestinians & injured 125 others.

In such a situation, Palestinians unwilling to surrender self-determination felt powerless, isolated, defeated. In such a political environment, desperate strategies were resorted to. That’s not an apologetic but an explanation.

Tens of thousands attended the funeral of Ayyash & he has been honored in many ways, including having streets named after him. When the US State Department & Israel, whose policies are based in state terrorism, object to what they call a ‘glorification of terrorists’, they display a colossal & contemptible mendacity.

The tribute to Ayyash was for a Hamas rally in Gaza to honor the families of dead Hamas activists. We stand with them without apology. Palestinians no longer stand alone & have the battalions of BDS lining up in their support.