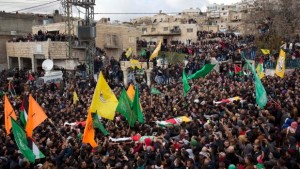 This is the funeral cortege yesterday in the village of Sae’er for four Palestinians shot dead by Israeli troops near Hebron in the West Bank. The reporting on their deaths is a travesty of journalism & shows what debasement happens when journalism becomes the groveling minion to power–in this instance to Israeli apartheid.

Some reports say the fatal shootings were on Thursday; most say Saturday. Only one report mentions the deceased are men; none give their names. Most of the accounts say according to the Israeli military the Palestinians were shot dead in two separate stabbing incidents in the West Bank & include statements like this from the Associated Press report: “The incident is the latest in more than three months of near-daily Palestinian attacks on Israeli civilians & soldiers that have killed 21 people, mostly in stabbings, shootings & car-ramming assaults.”

The media reports are what you might call generic–collective, non-specific, no-name. Some Palestinian guys got out of line; Israeli soldiers had to take them out. Their names don’t matter. They don’t matter. Because if any serious journalism was actually done of these shootings, the monstrous truth of Israeli apartheid & colonialism would be exposed for all the world to see.

Reuters is the one media source, & only in one sketchy report, that gave any details to the execution of two of the four men. Reuters made the declarative statement that Israeli soldiers shot dead two Palestinian men when they tried to stab soldiers at the Bekaot checkpoint. However, the report goes on to say a Palestinian taxi driver “who asked not to be identified” refuted this story. Reuters might have asked him why he declined to be identified. Was he afraid of retaliation by Israeli authorities? Anyway, according to the cabbie, three cars were in line at the checkpoint waiting to cross. Soldiers signaled the two men in the car ahead of him to move forward & when they did soldiers opened fire on them. There was no provocation; they never got out of the car or brandished knives. Reuter’s intrepid reporter adds, “A military spokeswoman asked about the taxi driver’s account said the army was still looking into the incident.”

Reuters then added the de rigueur mantra: “Since Oct. 1st Israeli forces or armed civilians have killed at least 139 Palestinians, 89 of whom authorities described as assailants. Most others have been killed in clashes with security forces.” What kind of respectable media relies on what authorities say? Especially when the authorities are the ones accused of murder? What the hell is the point of investigative reporting if your only source is the occupying military & Palestinians aren’t even asked their version of events? Isn’t that the very definition of propaganda?

As for the other two executed Palestinians, no media source thought to ask any of the mourners what happened, who were the two people shot, what were the circumstances. Because media reporting of Israeli apartheid & Palestinian Intifada is a con, a travesty of journalism, nothing more than propagandistic horse manure. So the less you tell, the less likely you’ll get caught talking through a horse’s ass.

The only way to thwart propaganda is to build the economic, cultural, academic boycott of Israel (BDS) & demand no aid of any kind to apartheid Israel.