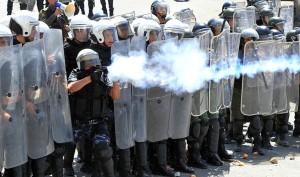 If there was ever any doubt about the Palestinian Authority (PA) led by Mahmoud Abbas playing both sides between Israel & the Palestinians, their conduct during the murderous assault on Gaza should suffice to indict them as traitors. Abbas, who had just signed a unity agreement with Hamas, let himself be played for an international fool & flouted that agreement by denouncing Hamas while Gaza was being bombed mercilessly & running around like a chicken without a head trying to broker peace on Israel’s terms of continued occupation & bombing. The PA is not playing both sides at all so much as serving proxy for the Israeli military. It will be a glorious day when Abbas & his operation are run out of the West Bank on a rail & Palestinians forge a leadership worthy of their historic struggle.

This photo is a protest in Hebron, West Bank in solidarity with Gaza against renewed Israeli bombing. Believe it or not, these are not Israeli soldiers but rather PA riot cops firing tear gas at protesters. Throughout the latest phase of Operation Ethnic Cleansing in Gaza, PA riot cops were deployed repeatedly to counter solidarity protests in the West Bank by halting & interrupting demonstrations, forcing marches to detour routes to avoid confrontations, & chasing & attacking protesters with tear gas & stun grenades, & arresting & jailing activists.

When you witness the treacheries of the PA & understand the political problems of Hamas it can seem discouraging & prospects unpromising. Leadership is always the great dilemma of social struggle. It can be said that forging a committed, uncompromising leadership team is the most important political problem human beings face everywhere in struggles against tyranny. Numerous just movements have been hoodwinked, derailed, or betrayed by unworthy leaders. The treacheries are legion–& that doesn’t include the outright bunglers or those bought for a song or a little sweet talk.

The Palestinian movement has a history & activists who show they have everything it takes, especially the intransigence required & the political savvy to counter US & Israeli scheming at their expense. With the monumental & historic shift of international solidarity, Palestinians no longer stand alone & will be able to forge leadership that can lead intifada to making real the vision of a democratic secular state where Jews & Palestinians live in peace.

Stand with Palestinian justice by continuing rallies & speak-outs & evangelize for the economic boycott of all Israeli products (barcode beginning 729).