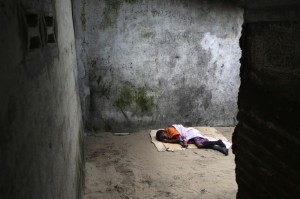 Photojournalism is coming to be neoliberal barbarism’s own worst enemy. Photos are circulating today of a US doctor named Kent Brantly, who contacted Ebola in Liberia while working at a hospital. He & another US health worker named Nancy Writebol who also contacted Ebola were the first patients to receive an experimental treatment at an Atlanta hospital; both were released this week.

Ebola virus disease kills between 50% & 90% of those infected because there is no effective treatment yet available. It was first identified in Sudan & the DR Congo in 1976 & several sources claim the disease typically occurs in tropical regions of sub-Saharan Africa, as if the epidemiology was related to climate & geography. The largest epidemic to date is currently in West Africa, affecting Guinea, Sierra Leone, Nigeria, & Liberia.

If you look at photos of the Ebola epidemic in Liberia, they are stark contrast to those of Brantly & Writebol jubilantly leaving the hospital. The images are described in media as “harrowing”–& that would be an understatement. The Liberian health department has dispatched “burial teams” all suited up in head-to-toe protective clothing to enter homes, spray disinfectants, & remove those who’ve died in the epidemic. Many of the living victims are moved, apparently forcibly, to quarantine in abandoned schoolhouse facilities without a stitch of furniture, including mattresses to lie on & without any medical personnel in sight. There is one photo of a very sick man on a flimsy mattress just feet away from a man who has already died. There is an image of a bereft woman standing over her husband lying on a bare floor after he fell & was knocked unconscious; again, no beds or medical staff in sight. There are images of family members forcibly removing their children from the isolation wards. And there are images of Ebola victims lying on bare ground.

On August 16th, a quarantine center in Monrovia was taken over by protesters & a number of patients fled. What can explain desperately ill people getting up off the floor & making a run for it when the Liberian government claims they’re being monitored? Perhaps officials could explain what “monitor” means. Some observors claim slum dwellers most hit by the epidemic believe the epidemic is a hoax manufactured to bring in international aid money. So perhaps they could also explain this widespread distrust in the government by the urban poor?

Liberia was founded in 1820 by freed slaves from the US who hoped for greater opportunity in Africa since the US was still under slavery. It was formed as a country in 1847 & was led by those colonists for over 130 years. It began to “modernize” in the 1940s with investment from the US & a military advised & bankrolled by the US Pentagon. It’s been all downhill from there, including economic & political instability & two civil wars with an estimated death toll of over half a million people. Today, 85% of the people live below the World Bank’s international poverty line of US $1.25 a day. Since a loaf of bread in Liberia costs $1.88, you can see that 85% of the people are also severely malnourished.

When the second civil war ended (in 2003), 95% of Liberia’s healthcare facilities had been destroyed. Many highly contagious diseases are now widespread, including TB, malaria, & diarrheal. Is it any wonder!?

It’s noteworthy that Liberian president Ellen Johnson Sirleaf is the 2011 winner of the ignominious Nobel Peace Prize. She is a strong ally of the US, including offering Liberia as a headquarters for AFRICOM. So if you want to know why Liberians don’t trust their government & why desperately ill people are fleeing medical quarantine more akin to solitary confinement in a gulag, take a closer look at the policies & alliances of president Sirleaf. If your president lies down with fleas, you get up with Ebola & TB, if you get up at all.

This image is a very sick 10-year-old boy lying in an alley on cardboard after a clinic refused to treat him because of the danger of infection.

Once again: oppression, thy name is “Made in the USA.” And once again, oppression won’t be decisively ended until US working people get off their butts & begin to play the role thrust upon them by privilege & US colonialism & act to restrain neoliberal barbarism paid for by their tax money & in their names.