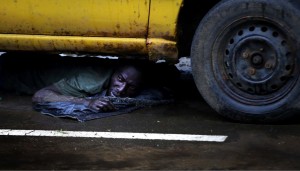 West Point is a township in the Liberian capital of Monrovia & considered one of the worst slums in the world–though many claim that ignominy since it’s hard to devise a Richter scale to measure squalor. West Point, where 75,000 people live, has been called a “giant outhouse” because it has no sanitation facilities & reeks of feces & urine. There are pay toilets (imagine charging people to poop!) but residents are dirt poor & can’t afford them so the Atlantic beach area is used as a public toilet & is filled with mounds of poop. Without sanitation, there are also mountains of garbage & raw sewage everywhere stinking up the place & breeding disease. This has increased the mosquito population & high malarial rates are added to TB & diarrheal diseases.

It comes as no surprise that West Point is one of the epicenters of the Ebola epidemic because you don’t have to be an epidemiologist to know that poverty, malnourishment, lack of health care, squalid living conditions are the root cause of Ebola & not the tropical climate.

Employing the military as substitute for health care, the Liberian government sent riot cops & the army to West Point on Wednesday to quarantine the entire area for 21 days–the incubation period for Ebola infections. Residents awoke to find their district occupied & riddled with checkpoints & buffer zones. Sounds like another police force trained in Israel.

Apparently the government never bothered to explain to residents what the hell was going on so people were confused about why they couldn’t leave the district; scuffles broke out with people screaming & throwing rocks. The army responded by firing warning shots & attacking protesters with truncheons. This is the healthcare system under neoliberalism, the barbaric phase of capitalism–closing off the area so whole populations will die anguishing deaths without making nuisances of themselves.

This visibly very ill West Point resident was forced to get under the car for detention by a Liberian army officer (yesterday) when he showed symptoms of Ebola & was caught trying to escape from the district. Neoliberalism is distinguished by barbarity but at what point did it decide to substitute military occupation for emergency health care? And at what point will suffering humanity decide enough is enough & begin forging the movements necessary to replace barbarism with civilization based on human needs & human dignity?

“An injury to one is an injury to all”: that is the iron law of social transformation. The US is up to its hairy eyeballs in Liberian politics so it’s about time working people here faced up to our fellowship with the working people of Liberia & elsewhere. If we fail that historic mission, we can all bend over & kiss our butts goodbye. Once again, the world we save will be our own.