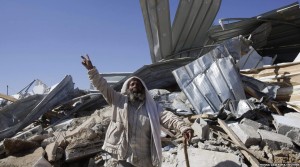 The media caption to this photo read: “A Palestinian man in front of his home, which was demolished by Israeli bulldozers near the Jewish settlement of Karmel.” And here we thought it was Gaza when in fact, it’s in the West Bank. We don’t know what the story is since elaborating on the violence of Zionist settlements in the West Bank belies all the Exodus mythology so media doesn’t much report it. While Zionists claim the Old Testament gives them the deed to Palestine nobody else, including Christian Palestinians can find that passage anywhere. They certainly can’t find the passages where God says extreme barbarism is allowed to reclaim a place they haven’t lived in for over 1,400 years.

The brief history of Karmel in Wikipedia is an example of Zionist colonizing of that source, making anything written about Palestine or Israel completely unreliable. The entry abruptly stops in the 9th century when, apparently for economic reasons, Jewish inhabitants left the area & abandoned the synagogue. What happened to the last 1,100 years of Arab history there? In fact, Islam goes back nearly 300 years more so there’s nearly 1,400 years to account for that are just left out of Zionist history but plenty of history books that do accommodate reality. Al-Muqaddasi, a 10th century Arab geographer, has written descriptions of all of Palestine, including the Hebron area of Karmel. He describes a mosque there in 985 CE. So if ancient deeds to the land prevail, they won’t be found in the Bible anymore than they are in the Qu’ran. Enough with Zionists making Biblical claims to Palestine!

We don’t know which Israeli rationale is justifying this house demolition. Israel has been moving freebooting Zionists into the area for a long time. These demolitions are all a piece with Israeli ethnic cleansing of Palestinians but sometimes they claim the houses are unauthorized or built with invalid permits. But the question is, why is Israel, which is illegally occupying the West Bank, allocating housing permits or deciding who is & isn’t authorized? If there was ever a compelling argument against the bantustate solution, that would be it.

During Israel’s Operation Ethnic Cleansing in Gaza, Israel returned to a policy of punitive demolitions which they employed between 2001-2005 when Israeli military bulldozers demolished 664 Palestinian homes “belonging to suspected Palestinian militants & their families” according to B’Tselem, the Israeli human rights group. As a rationale for demolishing homes, that is simply breathtaking. The relatives of someone “suspected” (Of what? Throwing rocks at Israeli bulldozers?) get their homes taken out with explosives & bulldozers. And the (so-called) “international community” & UN aren’t screaming bloody-murder at the violation of umpteen (albeit impotent) international laws?

Punitive demolitions were abandoned in 2005 because the military decided they engendered resentment & inspired militance among Palestinians, “helping fuel the Palestinian insurgency”, as the Washington Post put it. But actually who needs punitive demolitions when you use that rubbish about invalid permits & unauthorized housing? Who needs any rationale at all when you can just move bulldozers in & the “international community” doesn’t make more than a peep of protest?

Solidarity with Palestinians has never been more critical. Public outrage (except by the colluding international community) against Operation Ethnic Cleansing has Israel & it’s Biblical deed claims on the run. We need to build the hell out of the cultural & economic boycott of Israel (barcode beginning 729) with rallies, teach-ins, forums, speak-outs. Justice demands it & peace in the Middle East will be the reward.