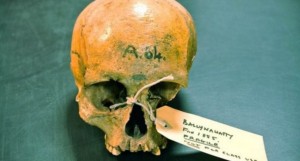 Irish scientists have just completed sequencing the genomes of a 5,200-year-old female farmer from the Neolithic period & three 4,000-year-old males from the Bronze Age. Her bones were excavated near Belfast & the men in Country Antrim. DNA evidence indicates their origin is the Fertile Crescent which includes Palestine. Bones don’t lie–unlike Israeli historians & myth-makers.

If this is true, the Irish & their ancestors dispersed all over Kingdom Come have a claim to Palestine which predates the Zionist’s nonsensical claims. Here we thought Irish claims to the Rhineland were invalid though their ancestors came from there 3,000 years ago, plus or minus a few centuries.

Israeli immigration policy is skating on thin ice since it’s based on a few stanzas in the Old Testament & a considerable library of folklore & mythology. But as it goes, the patriarch Jacob fathered 12 sons who became progenitors of the 12 tribes of Israel. The narratives are necessarily short on dates & details but somewhere around 722 BCE, ten of the tribes were deported by the Neo-Assyrian Empire (whoever the hell they are). Israel has immigration officials out scouting the planet for the descendants of these lost tribes to patriate them as Israeli settlers.

One of the ten lost tribes is the tribe of Dan who are known among some scholars/myth-makers as seafaring people who colonized Ireland in the 7th century BCE under the name Tuatha Dé Danann. Hence the ancient tune “Danny Boy” written in 1910 to honor that lineage.

The Dan clan must have been quite a promiscuous one that let no continents stand in their way because Ethiopian Jews admitted as Israeli citizens in 1979-1990 under the Law of Return were deemed the lost tribe of Dan by rabbinical decrees, contrary to DNA evidence.

There are also Scandinavian peoples from Sweden, Denmark, Finland, Iceland, & Norway who claim ancestry from the tribe of Dan. Had that clan no shame? There are certainly plenty of Old Testament stanzas that would damn such profligate behavior. No wonder some claim the Antichrist will come from the tribe of Dan.

One less than compelling piece of evidence presented to support the Dan ancestry for Ireland is the harp, a symbol of Ireland which also plays a role in Jewish history as the musical instrument of King David who reportedly lived from 1040 to 970 BCE. Less than compelling we say since the harp has a history that goes back at least to 3,500 BCE in Asia, Africa, & the Middle East. Grasping at straws makes a fool of even the most credentialed academic.

There are others booking claim as the lost tribes, including Pashtuns from Afghanistan & Pakistan; Igbo people from Nigeria; indigenous people from the Indian states of Mizoran & Manipur; indigenous peoples from Peru. The one thing they share in common, since they all fail DNA tests, is long-time exposure to Christian Evangelical missionaries with a vested interest in messianic nonsense about those lost tribes.

Even if those bones do derive from ancestors in Palestine, no one has a claim to Palestinian land based on DNA, the Old Testament, apocryphal gospels, or rabbinical decree except the people of Palestine.