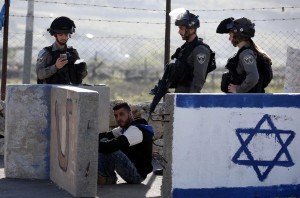 The Guardian-UK caption to this photo read, “Hebron, West Bank: Israeli border police with an arrested Palestinian at a checkpoint in Beit Hanoun.”

The problem is that Hebron in the West Bank is about 65 km/40 miles from Beit Hanoun in the Gaza Strip. Beit Hanoun is the town a few miles from the apartheid barrier across from the Israeli town of Sderot. In the 2014 carpet bombing of Gaza, Sderot gained international ignominy when townspeople pulled up easy chairs to wave the Israeli flag & cheer on the ethnic cleansing of Gaza. Beit Hanoun is where in July 2014, Israeli bombers took out a schoolhouse used by the UN as a refugee center for families. At least 16 people died & small children were treated for massive shrapnel injuries.

This photo is probably not Beit Hanoun but Hebron where just two weeks ago an Israeli soldier cocked his gun & shot 21-year-old Palestinian Abed al-Fatah al-Sharif in the head when he had already been shot & was lying on the ground incapacitated. The Israeli occupying army alleges he stabbed an Israeli soldier but that can be dismissed with no further ado as propaganda to justify summary execution.

Photos like this–where unarmed Palestinians are surrounded by Gestapo-like military force ready to execute on the spot–show exactly what Palestinian Intifada is up against. Now we know exactly what kind of political pressure must be mobilized in defense of Intifada.

Build & honor the economic, cultural, & academic boycott of Israel; check every damn thing you buy & buy nothing with barcode beginning 729.