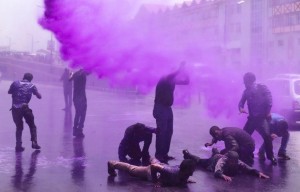 It wouldn’t be a protest of Kashmiri government workers if Indian police weren’t assaulting them with purple rain from water cannons. Purple rain was first used against protesters in apartheid South Africa in 1989 but is now used by riot cops in several countries. The chemicals which are toxic are used primarily to identify protesters for arrest.

Year after year, these workers have been protesting despite extreme violence, tear gas, purple rain, & other assaultive weapons. They are demanding the regularization of their jobs from contractual day work. Indian police arrested dozens today. There are no reports on the number injured.

Perhaps those from Kashmir can elaborate on this & other struggles.
Our fullest respect & solidarity.