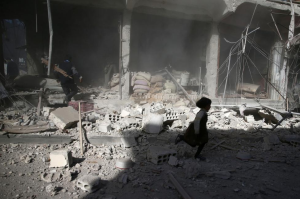 This little girl is running past a building recently bombed by Syria in the rebel-held town of Douma in the Eastern Ghouta suburb of Damascus where nearly 110,000 civilians live. Because of opposition to the Assad regime, the area has been under military siege since 2012. But the Syrian government is now engaged in a several month offensive waging heavy aerial & ground shelling assaults on civilians & infrastructure, including hospitals & schools.

Much life in Douma is spent underground with basements used as schools & playgrounds, underground bombing shelters tunneled beneath homes, & even bakeries & medical facilities. On days following air strikes, only ambulances, rescue workers & paramedics are in the streets.

Assad supporters claim bombing of civilians is to take out “jihadist” groups controlling civilians & even that children like this little girl are being used as human shields. They are jubilant at news about the armada of Russian warships now in the Mediterranean Sea to launch missiles & airstrikes on cities like Douma which would kill far more civilians than paramilitary forces.

It can never be said strongly enough that if you support militarism & carpet bombing–US, Russian, Syrian, Iranian, or a combination of all of them–as a solution to the war in Syria, your political motives are suspect, your judgement deranged, & you become part of the problem.

The only principled response & only possible solution is to demand the immediate cessation of Syrian & Russian bombing; the immediate, unconditional withdrawal of all foreign military forces, regular & irregular forces, overt & covert, air & ground & to actively organize internationally around those demands.