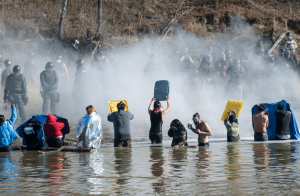 This is a recent protest on the Standing Rock Indian Reservation near Cannonball, North Dakota against the building of the Dakota Access Pipeline (DAPL). Riot police are using pepper spray against protesters standing in the river.

The Dakota Access Pipeline is a project that starts in North Dakota & travels 1,200 miles across North Dakota, South Dakota, Iowa, & ending at a terminal in Patoka, Illinois where it will be processed for distribution. Using eminent domain for land grabs, the route will pass near municipal water sources, residential areas, Indian reservations (defying tribal sovereignty & sacred burial grounds), wetlands, nearly 350 miles of farmland in Iowa, & will be tunneled under the Missouri & Mississippi Rivers.

This is classic neoliberal economic policy which has been devastating indigenous rights on every continent since the 1980s with accelerating military aggression against resistance. Multinational agribusiness & mining industries take over lands with the military assistance of national regimes. All over Latin, Central, & North America; Africa; South Asia. This is one of the chief causes of environmental destruction, climate change, the growth of urban slums, & the crises of dispossessed immigrants & refugees.

Energy Transfer Partners is a US Fortune 500 natural gas & propane company founded in 1995 & based in Dallas, Texas. It is the parent company of Dakota Access, the subsidiary developing the Dakota Access Pipeline.

The fight against DAPL has already gone international because millions of indigenous peoples around the world know exactly what is going on in North Dakota & solidify with the Standing Rock tribe. It is going to be a long fight because the most powerful forces in US politics, including the White House, support the pipeline. It will have to be fought on many fronts & with a variety of tactics.

Refusing to patronize Sunoco, Petro-Canada, & Stripes gas stations is the beginning of what could become an organized boycott in solidarity with the Standing Rock Indian tribe in North Dakota.