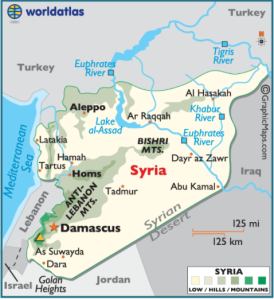 Just over a week ago, a Russian flotilla of seven ships led by the aircraft carrier Admiral Kuznetzov entered the Mediterranean Sea headed for Syria. Dozens of Russian fighter jets & attack helicopters can be launched from the aircraft carrier or they may become based at the Khmeimim Russian Air Base built last year near the Syrian city of Latakia on the coast.

According to Russian state media reports, since Russia entered the war in Syria in September 2015, it has deployed Kalibr missiles dozens of times targeting Aleppo, Raqqa, & Idlib provinces.
In October 2015, some of those missiles traveled through Iraqi & Iranian airspace & anonymous US Department of Defense officials claimed four crashed in Iran. The Russian & Iranian governments, allies of Assad in Syria, both denied the crash occurred. US Pentagon & State Department officials refused to comment on the reports–just as they dummy up on Syrian & Russian bombing of cities despite the most sophisticated military surveillance equipment in the world. From Langley Air Force Base in Virginia they can watch Assad scratch his ass & from the White House can watch Osama bin Laden be assassinated so they damn well know who is bombing what in Syria.

This military build-up is what a significant section of progressive forces support in their demented scenario of Syria & Russia against US-backed “head-chopping jihadists.” Russian missiles is their idea of freedom fighters–just as another group of anti-Assad activists support US cruise missiles as a salvation army.

Where have they gone wrong? At what point did they decide there is humanitarian militarism as opposed to barbaric militarism? The role of principled antiwar activists is to oppose all military operations in Syria, including that of Assad, so that the Syrian movement against dictatorship has a clear field to finish the mission they began in 2011.

Shame on those who think missiles & bombers can accomplish the tasks of revolution & democracy. They don’t understand the first thing about politics & have no right to call themselves antiwar activists or progressives.