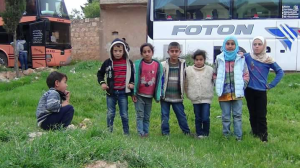 By all accounts, Syrian government rescue workers were side-by-side with White Helmet rescue workers to save victims of a suicide bomb attack on a bus convoy outside Aleppo yesterday. It was a gruesome incident, a monstrous attack on civilians, where a suicide bomber driving a commercial van detonated himself near the buses which also ignited a nearby petrol station.

Images after the explosion show strewn & charred bodies, including of many children. The Syrian Observatory for Human Rights (SOHR) gave the estimate of fatalities as 126, including 68 children, & said they expect the death toll to increase because of the severity & numbers of the injuries.

The bus convoy was part of a complex diplomatic arrangement involving Syria, Iran, Qatar, Hezbollah, & opposition groups to evacuate & give safe passage to about 7,000 pro-Assad civilians living in two towns surrounded by rebel forces in return for evacuation & safe passage of 2,000 revolutionary civilians who lived in two towns besieged by government forces. It would eventually have forcibly relocated about 30,000 people along political battle lines over the course of two months.

The convoys carrying both these groups were stranded outside Aleppo en route to their destination, reportedly due to officials wrangling over the number of fighters traveling among the evacuees. Reliable information is not yet available & may never be because this deal stinks to high heaven. It has been called a humanitarian operation but since when did forcible relocation of thousands of civilians, whatever their politics, become humanitarian? What exactly is this deal all about?

There are a lot of other questions also. Because of the magnitude & volatility of such an exchange, why would they allow civilians to be endangered by differences over the number of fighters included on either side? That would have been an anticipated problem, not one to be worked out on the road. Why was a delivery van allowed proximity to a controversial convoy of civilians without being searched top to bottom? Don’t try to tell us there were oversights here. There’s culpability here that all the parties involved have to answer for.

The SOHR director said he does not believe the Assad regime is behind the attack because the convoy was carrying civilians sympathetic to the regime. A White Helmet rescue worker at the scene said, “This is a terrorist act. We lost martyrs on both sides & we saved people on both sides.” Syria’s main militia groups, under the banner of the Free Syrian Army, condemned the bombing, calling it a “treacherous terrorist attack”. There is no report of what Assad or the other governmental parties to the deal have to say about the attack.

There’s no point speculating about who would have done this, who stood to gain, because several parties, including the most extremist militias & undercover operatives from several governments, stood to gain a lot by maximizing conflict between civilians on both sides of the political divide.

Our deepest condolences to the families who lost their beloved in this monstrous crime. May they Rest In Peace.

Photo is children from the convoy during the delay at Aleppo before the bombing.