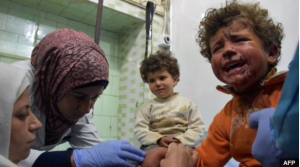 Let’s put aside for the moment the questions about how a suicide bomber could drive his van right up next to the bus convoy without being frisked by Assad troops. Let’s put aside that media has to rely on reports from the Syrian Observatory for Human Rights (SOHR) in Coventry, England rather than Assad officials conducting forensics on the spot. Let’s not question right now why Assad has said nothing about this bombing. No accusations, no imputations; we’ll just table those unanswered questions for the moment.

Let’s instead take a look at how Assadist apologists have responded to the bombing & horrific deaths of 126 civilians. It is no surprise that few have expressed horror at this monstrous crime but instead are using it to hammer home their defense of Assad’s dictatorship.

Rania Khalek & Rania Masri are among the boldest, if not also the most simple-minded, of Assadists, only outdone by Tim Anderson who is deranged. They don’t hesitate without a shred of evidence, before the forensics have begun, to claim al-Qaeda is responsible for the bombing. Masri, a long-time & profoundly stupid defender of Assad, makes the accusation with no attempt at explication. She thinks her academic speciality in the morphology of pine trees allows her to speak in the oracular voice & just pronounce them guilty. Her credibility is pushing its luck.

Khalek, whose claim to expertise is a road trip with the Syrian army, actually attempts to explain why al-Qaeda is guilty. The victims of the suicide bomber had been evacuated from two pro-Assad towns besieged by al-Qaeda. According to her, Qatar, a party to the relocation deal with Assad, is “a primary backer of al-Qaeda in Syria” so that means al-Qaeda did it. She may have been dropped on her head too often as a child.

Talking through their asses about who’s responsible isn’t the worst of it for Masri & Khalek. Al-Qaeda could be behind the suicide bomber even if he couldn’t have gotten near the buses if Assad officials had been controlling the relocation operation with necessary due diligence. The worst of it for both of them, Ben Norton, Max Blumenthal, Tim Anderson, Eva Bartlett, Vanessa Beeley, & all the rest of them is their now openly Islamophobic aspersions against all who oppose the dictatorship of Assad. It isn’t just jihadi head-choppers any more. It’s Sunni Muslims.

Islamophobic ideology has been operative for a long time in US strategy in the Middle East. Part of it is portraying Islam as a fractious, sectarian religion riven between Sunni, Shia, & all the other denominations. And not just portraying Islam as sectarian, but actively using covert operations to foster conflict between the different currents of Islam. In the Middle East, the US has used class & social differences within denominations to generate political, religious, social conflict as a strategy of social control.

But now this sectarian portrayal of Islam is the explanation Assadists are using to vilify the revolution against Assad’s dictatorship. Khalek & Ben Norton elaborated it in their giggly, banal interviews on the Dead Pundits Society where jihadism morphed seamlessly into Wahhabism/Salafism & then into Sunnism.
Masri & Khalek & several other prominent Assadists circulated this article by Amal Saad, who writes for the World Shia Forum, a creepy Assadist blog:
****
“This horrific bloodbath of evacuees from Fua and Kefraya is far more dangerous than the US strike last week. The slaying of scores of displaced Shia (one video I watched now showed 4 or 5 destroyed buses filled with dead children) is clearly aimed at provoking sectarian retaliation against the Sunni evacuees from Madaya and Zabadani who are on the other end of the evacuation deal, and sectarian incitement against Sunnis generally. Opposition supporters in the West and Arab Gulf are already bizarrely blaming the Assad government for the carnage and shielding the takfiri terrorists from blame. It isn’t merely a case of Shia lives don’t matter, i.e. Shia deaths being underreported by mainstream media, or that western leaders don’t consider dead Shia babies to be politically convenient enough to qualify as “beautiful” , or of simply imagining what western and Arab coverage would be like if the victims were from Madaya and Zabadani. It is that White Men who claim to speak on behalf of “oppressed Sunnis”–i.e. policy wonks, journos and pundits–will label us “sectarian” if we dare accuse ISIS, al-Qaeda and Takfiri rebels of targeting Shia. And by “we” i mean anyone of any sect or religion, including Sunni Muslims, who dares point out the obvious. Any mention of Shia victimization is taboo; it is unprogressive, Islamophobic, and it is “disempowering” to Sunnis. These are the new parameters of acceptable, liberal PC discourse: the identity of victims must not be highlighted unless they belong to the politically expedient sect or group of the day.”
****
The cognitive dysfunctions in this Assadist rubbish pale in comparison to the cynicism, dishonesty, paranoia, & banality of Masri, Khalek, & their cohorts attempting to turn the Syrian revolution against Assad into a sectarian dispute between Shia & Sunni.

There is no where to go from here. When your politics are indistinguishable from US Pentagon war-mongering, when it becomes babble & bull manure, it’s time to find a new career. Masri should go back to cloning pine trees & Khalek to calisthenics because they have been confounded by revolution against injustice & now resort to lies, banalities, & hate-mongering.

They never once expressed horror at the suffering of the children.