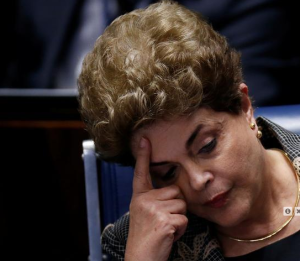 The impeachment of Dilma Rousseff is outrageously undemocratic & certainly a rightwing thrust by the Brazilian oligarchy to move the neoliberal transformation of Brazil much faster & more aggressively. The massive protests of millions against Rousseff’s neoliberal policies alarmed them. And for good reason.

What is important is not her removal but the very real threat to democracy in Brazil that it represents. Whatever her youthful politics, she was fully incorporated into capitalist politics as president & is no martyr nor hero. Brazilians protesting today in her defense previously protested her policies.

The liberal regimes that replaced military juntas throughout Latin America without challenging oligarchic rule may be exhausting their political usefulness. That is the danger her impeachment represents.

(Photo of Rousseff from Reuters)