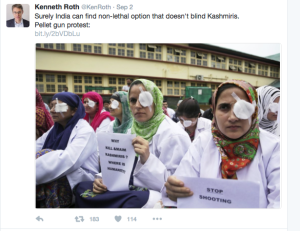 This Twitter from Kenneth Roth, the Executive Director of Human Rights Watch (HRW), typifies the political Achilles Heel of that organization. HRW is an establishment NGO that will not condemn military action, including wars & occupation. but only suggest more humane ways to conduct them. How many humane ways are there to kill people who are unarmed?

In response to an article in the Washington Post that said “the Indian government is now looking for a new nonlethal weapon that can temporarily incapacitate violent mobs without causing permanent damage,” Roth tweeted “Surely India can find non-lethal option that doesn’t blind Kashmiris.”

Why doesn’t Roth propose the end of the occupation & the immediate withdrawal of Indian troops as the only non-lethal possibility in Kashmir?