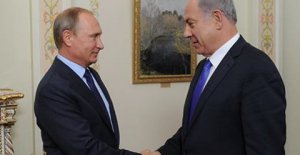 Rightwing & anti-Semitic supporters of Assad will be distressed to read about Netanyahu & Putin’s phone discussion today where they pledged to develop closer Russia-Israeli relations.

This news is not mainstream media propaganda. No way! It came straight from the Kremlin via Sputnik News, the preferred source of alternative media for Assad supporters.

According to this unimpeachable media source totally owned by the Russian government, “Russia & Israel have signed 19 intergovernmental agreements & work to improve the legal infrastructure of Russian-Israeli cooperation. Israel is an important trade & economic partner for Russia, with bilateral ties in industry, agriculture, high technology & more.”

That group of US antiwar activists who just came back from meeting Assad proclaiming US intervention in Syria is all about Israel are going to have to change their tune. So will Palestinian supporters who claim the war in Syria is all Israeli & US machinations. David Duke (the former Grand Poobah of the KKK) & all the other rightwing nationalists & anti-Semites making pilgrimage & swearing fealty to Assad are going to be thrown for a loop when they find out “Zionist Jews” in Israel, the US, & mainstream media are not behind the war in Syria–at least not in the way or on the same side anti-Semitic nationalists claim they are.

However will the lot of them maintain their support for Assad’s dictatorship & consider Russian bombers, special forces & mercenaries as freedom fighters when it puts them all on the same side as Netanyahu? When it is entirely evident that supporting Assad & Putin in Syria sabotages, even betrays, the Palestinian struggle for self-determination?

Let’s do a Nostradamus here: there’ll be some analytical quick-stepping, some formulaic shuffling, but many will end up still claiming Israel is behind the war in Syria & supporting Putin & Assad. That’s the way cognitive dissonance rolls in politics.