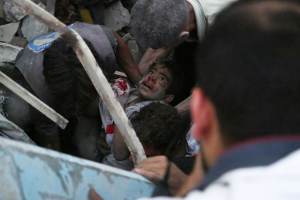 Just a word about photojournalism coming from Eastern Ghouta & Afrin, Syria: professional propagandists like Bartlett & Beeley focus on images glorifying the Syrian army & obsequious paeans to Assad. When they post photos of civilians, it’s rubbish showing how happy they are to be ‘liberated’ from head-chopping terrorists by the Syrian army. Beeley is a regular cesspool of this stuff. Beside her equestrian skills & aptitude with alternative facts & post-truth truthiness, she knows how to grab a photo op of Syrian soldiers kissing babies.

For most media, it’s just too dangerous to put journalists on the ground in Syria, even if they could get permission from Assad, so they rely on citizen journalists. Agence France Presse (AFP), which had some of the most powerful images of civilians from Aleppo & now from Eastern Ghouta & Afrin, relies on citizen journalists/stringers, most of whom they’ve trained. They receive hundreds of photos of the bombing operations from these citizen journalists who play an essential journalistic role & not just in Syria. Probably in response to Assadist claims that civilians being bombed in Eastern Ghouta are terrorists, human shields for terrorists, actors, or dolls, AFP reports that they carefully vet the veracity of every single photo they receive before it is published. In addition, there are media centers in Aleppo, Ghouta, & elsewhere where professional & citizen journalists report in videos & photos what is happening on the ground to civilians. The White Helmets also have photographers.

The images from bombing civilians are gruesome & only posted to show the criminality of what is going on in order to expose the lies of fascist propagandists & their fellow travelers. We should take a moment to honor the work of those citizen journalists, especially those who have been killed, arrested, or disappeared.

This photo is a boy being rescued by a White Helmet in Douma on June 16, 2015. Douma is in Ghouta, just to show how long carpet bombing has been sustained by civilians.