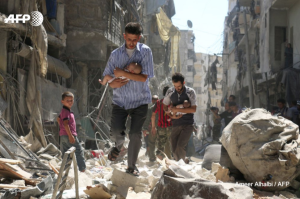 A former Russian air force commander who is now a senior politician in the Duma recently boasted that “As we helped the brotherly Syrian people, we tested over 200 new types of weapons. It’s not an accident that today they are coming to us from many directions to purchase our weapons, including countries that are not our allies. Today our military-industrial complex made our army look in a way we can be proud of.”

So while Russia is bombing Syrian civilians–in a brotherly way, of course–it is using them as test subjects for its thermobaric, laser, TV, & satellite guided, subsonic, & barrel bombs. Meanwhile Tariq Ali is writing that Russia is bombing Syrians “to stem the tide of absolute darkness”; the “retired” CIA, FBI, & Pentagon officials leading the US antiwar movement are writing denunciations of Russiagate & blithering about a new McCarthyism; Rania Khalek, Jeff Mackler, Cindy Sheehan, Vijay Prashad, Ben Norton, Max Blumenthal, Sara Flounders, Brian Becker, & other lowlifes are claiming that Russia is only bombing terrorists–like that was a good thing.

Stand with the Syrian people & demand the immediate cessation of Syrian, Russian, Turkish, & US coalition bombing of civilians & the immediate, unconditional withdrawal of all foreign military forces from Syria.

Photo is Syrians running from the brotherly love of Russian bombs.