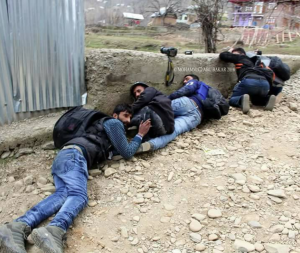 If there is any doubt about the dangers of being a journalist, this photo is from a hunt to kill operation these journalists were covering today in Helmetpora village, the Kupwara district of Kashmir. There is a crescendoing campaign to censor authentic journalism, especially on social media, & substitute it with manicured news (also known as propaganda). This is an old debate & there is a time-worn pattern to this, where they start at the extremes like tossing the rabid nationalist Burmese monk Wirathu off FB, or Syrian Girl, or some white supremacist group. But their target in the long run is Kashmiri activists & journalists, Rohingya & Palestinian journalists. Don’t we all love to see those extremist haters kicked in the ass but it’s a short-sighted vision because the censorship is always primarily directed against the forces of social transformation, not the forces of social hatred.

Our deepest respect for these Kashmiri journalists who face not only gunfire but possible arrest.