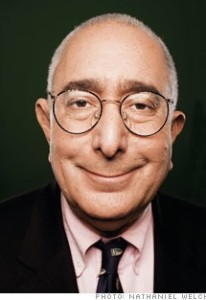 It’s hard to believe Ben Stein, the right-wing commentator for Fox News & other reactionary venues, is anything but a parody based on his film roles. He seems direct from the cast of Monty Python’s “Upper Class Twit of the Year.” But he came by his idiocy honestly; he inherited it from his father Herbert Stein, who was an economic advisor in the Nixon regime (1971-74). Herbert had a treacherous streak since he was a proponent of the Chicago School of Economics associated with Milton Friedman & the murderous Chilean coup in 1973 where Friedman first applied his economics.

Herbert had a theoretical bent of mind & formulated “Herbert Stein’s Law” that claims “If something cannot go on forever, it will stop.” Pomposity apparently runs in the family because he postulated this banal tautology with the same solemnity his progeny has made so infamous–as if they both watched too many cartoons & missed their calling in the circus. They both cop an attitude but they talk like they have marbles in their mouths & rocks in their heads.

Ben Stein got an Ivy League education at Columbia & Yale–but quite frankly after George Bush (either one–take your pick) graduated from Yale, there’s a stinky miasma around that distinction that just won’t go away. Nepotism got him out of the Vietnam War & a job writing speeches for Nixon (& later following his father, with Gerald Ford). Stein’s rhetorical flourishes (which at their most emotive sound like the engine on an air conditioner) could not have helped the Nixon cause one iota. Stein is a blowhard & pervert & while he was writing speeches for Nixon defending Vietnam, he claims he was at protests where there was “a lot of balling” going on. Only in his wet dreams.

Stein continues to hold the universally despised Nixon in highest esteem as a peacemaker. He cried at Nixon’s resignation & claims he still cries about it 40 years later. He wrote a eulogy for Milton Friedman in Time Magazine entitled “Milton Friedman, Freedom Fighter” (2006). So is it any surprise his views on other issues are drawn from cesspools? He opposes women’s reproductive rights, disavows climate change, & not only opposes evolution but campaigns in speeches & a documentary film for creationism & intelligent design. His propaganda film against evolution is called “Expelled” No Intelligence Allowed” but he wanted to title it “From Darwin to Hitler” because he claims “Darwinism inspired & advanced Nazism.”

Stein’s emotive repertoire might be stuck in engine mode but he’s a busy boy commenting on political events about Israel & Blacks in this country. He’s a rabid Zionist who wrote a column denouncing criticisms of Israel for its military raid against the Gaza Freedom Flotilla in May 2010. In international waters Israeli commandos attacked six civilian ships carrying humanitarian aid to Gaza to break the Israeli blockade. Nine unarmed solidarity activists were shot & killed. Stein claimed the commandos were attacked by activists but he won’t explain why the hell the commandos forcibly boarded the ships.

It’s Stein’s unspeakably stupid comments about Blacks in the US that most distinguish him & the more you know of them, the more wretched he becomes. It’s not exaggeration to say he hates Blacks–more than he hates everybody else, that is. In 2005, with the entire world watching Hurricane Katrina on live TV for over a week, the Bush regime did nothing, nada, zip, zilch to rescue thousands of Black men, women, & children. The nation stood aghast while media beat the drums about looting–as if starving people should consider supermarkets sacrosanct. This is Stein’s take on all that: “George Bush did not cause gangsters to shoot at rescue helicopters taking people from rooftops, did not make gang bangers rape young girls in the Superdome, did not make looters steal hundreds of weapons, in short make New Orleans into a living hell.” How do you jam so much racism, stupidity, & lies into one sentence!?

In 2011, when IMF chief Dominique Strauss-Kahn was accused of raping a hotel maid in NYC, Stein rushed to his defense. But of course every time he opens his mouth, he proves himself an idiot. He said: “People who commit crimes tend to be criminals. Can anyone tell me any economists who have been convicted of violent sex crimes? Can anyone tell me of any heads of nonprofit international economic entities who have ever been charged and convicted of violent sexual crimes?” Translated, that means you can’t call the head of the IMF a gang banger; he’s not Black!

Stein went on to say Strauss-Kahn is a “short fat old man” who didn’t have a gun or a knife so how can prosecutors claim he forced the woman to have sex with him? And he proceeds to impugn the woman accuser who is Black & thus to Stein’s mind not believable.

As if Stein hasn’t already made a complete ass of himself over & over again, CNN & other media interviewed him on the murder of Michael Brown in Ferguson. His comment is worth reading in full: “The idea of calling this poor young man unarmed when he was 6’4″, 300 pounds, full of muscles, apparently, according to what I read in the New York Times, on marijuana. To call him unarmed is like calling Sonny Liston unarmed or Cassius Clay unarmed. He wasn’t unarmed. He was armed with his incredibly strong, scary self.” Once again, how can you jam so much racism into one sentence!?

Shall we ignore that Muhammad Ali changed his name from Cassius Clay in the 1960s? Shall we ignore that not having a weapon spoke to Strauss-Kahn’s defense but not Michael Browns? Should we accept that being short & fat means you’re not a rapist but being a big kid means you’re scary & your muscles constitute an assault weapon? Or should we recognize that Ben Stein is not just a bone-headed buffoon but a vicious nasty-assed racist?

Two-bit halfwits like Stein aren’t usually worth the time of day. But when he attempts to vilify a young man murdered in the prime of life for nothing more than being Black, we should hold him in contempt & demand he be thrown off the airways.

Stein is just as ugly as he is stupid & bears an unfortunate resemblance to Kissinger who he worked with in the Nixon regime. Use his photo for practicing your horse manure shot.