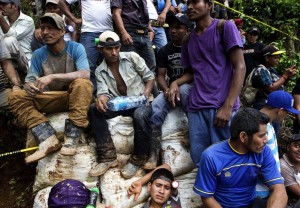 These men are part of rescue operations at the El Comal gold & silver mine which collapsed trapping 24 miners underground. The mine is in Bonanza, in northern Nicaragua. Media reports on this collapse are outright sneaky, calling the mine an illegal, artisanal operation. That would suggest the miners are working on their own like prospectors & if conditions are unsafe, it’s their own responsibility. But that’s not how mining works in countries under neoliberal plunder.

The mine is actually owned by a Colombian company named Hemco. The miners are not hired as workers but contracted as freelancers if they agree to sell the gold they find to Hemco. Of course if they attempt to walk away with any gold to get a better price elsewhere, there are company good squads to dole out frontier justice. The purpose of this labor arrangement for Hemco is to have a weak, unorganized work force. If workers start squawking about safety, work conditions, or pay, their contracts are cancelled & the next desperate guy is hired.

The World Bank actually promotes & bankrolls artisanal mining precisely because it maintains labor in such a vulnerable position & unable to challenge neoliberal plunder. Part of the arrangement is that workers take all the risks without deriving any benefits since the wages are chump change. In many countries in Africa & Latin America, artisanal gold mining is a major industry & includes thousands of children. Mercury & other toxicities are involved in the processing, creating massive health problems & environmental catastrophe. The miners without knowledge of the international market in gold (now over US $1,000 an ounce) sell the gold to middle men who deal it on the market.

Hemco is trying to walk away from responsibility at El Comal saying they warned the workers things were unsafe. The Nicaraguan government may not have made the mine legal but they knew damn well it was operating unsafely. Any attempt to blame this collapse on the miners is rubbish.

Unions have taken a beating in most countries. Not the least of their problems is a leadership of insuperable stupidity & servility to the status quo of power. Neoliberal plunder depends on an unorganized, weak work force. That’s one reason it promotes child labor who are defenseless against bullying & violence. This is a political problem facing working people in every country & one of the historic tasks that must be addressed with intelligence & commitment. Neoliberal capitalism isn’t moving backwards to feudalism; it skipped right over that stage & headed straight to barbarism. Working people need to stop it in its tracks.